Tim Wilkie
With Öhlins since 2015
Years in the industry: 25 years
Specialty: Motocross

Tim Wilkie has been with Öhlins since 2015 as a Service Technician. Before that, he serviced, repaired, and set up motorcycles going back to the 90s. Tim worked as a mechanic and Öhlins suspension specialist with Pro motocross and Supercross teams. Many of the amateur motocross racers he has worked with have become National Champions.
Tim road raced with CCS and WERA in the late 90s early 2000s.  After that, he moved to Hare Scramble racing with GNCC, NCHSA, and other organizations. He became the US Sprint Enduro Regional Champion and World US Sprint Enduro Champion in 2022.
He has been married for 22 years and has four kids and six grandchildren. 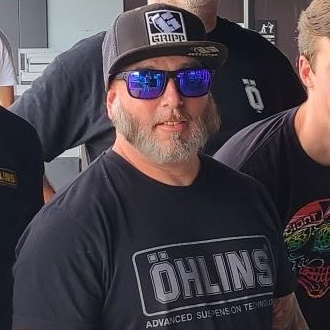 ​​Mike Hampton
With Öhlins since 2019
Years in the industry: 21
Specialty: Automotive, MTB

Mike is like a “Swiss Army Knife” when it comes to suspension.  While he specializes in our Automotive segment, he began as a technician for MTB and helps with Motorcycle. Mike raced amateur motocross for eight years and made it to B level.
Mike is a serious “gear head” and when he is not working at Öhlins, he can be found working in his shop, riding dirt bikes, 4-wheelers, SxS’s, trucks, cars, and really anything that has wheels.  When it comes to fixing up those big boy toys for racing, if Mike is involved, they will be modified, tuned up, and ready to Race! 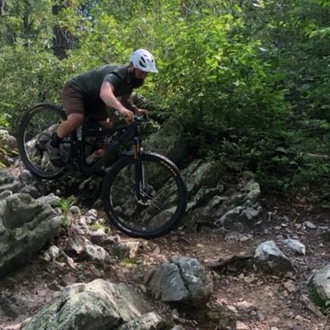 Chris Regec
With Öhlins since 2019
Years in the industry: 16
Specialty: MTB

Chris is the MTB Service Technician here at Öhlins USA.  As the only dedicated MTB technician, he has done almost all the bike service that has come through the door since he started here in 2019.  We usually find him with oily hands, but he also takes the time to answer tech-related emails and phone calls.
Chris has worked in retail and manufacturing in the bike industry since 2006.  Most of his time was spent with a wrench in hand and there is not much he doesn’t know about MTBs.
In his spare time, you can find him outdoors, usually riding bikes, fishing, and hanging out with his family. 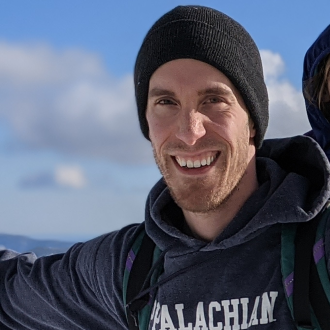 Shane Dunn
With Öhlins since 2020
Years in the industry: 10
Specialty: Service Administrator

Shane is your first point of contact if you email or call the Öhlins USA service department.  He is our trusted “quarterback” when it comes to scheduling and delivering on the promise of exceptional customer service.  He has been in the industry for more than 10 years and loves talking about what a properly set suspension will do for any ride.  Throughout his career, Shane has had a variety of roles and responsibilities, he understands your needs and will do everything possible to help.
He has lived in Western North Carolina for 12 years and tries to spend as much time outdoors with his young family as possible, and riding bikes whenever time allows. 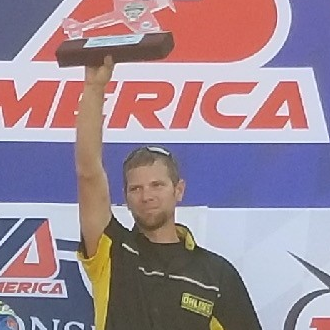 Brad is a Master Suspension Technician at Öhlins with the knowledge that goes back decades. With all his experience he is often called upon to help in many areas at Öhlins.  You might find him in R&D, Production, or training a group of dealers on the latest processes. Brad is most comfortable in the paddock and has been the lead suspension mechanic for several professional road race teams.  From 2009 to 2019 he traveled throughout North America delivering wins with the MotoAmerica Superbike and Supersport classes. His list of accomplishments is too long to list here, but he is most proud of his 2017 Superbike Championship with Toni Elias!
Brad says his family is the most important thing in his life and in his free time he enjoys riding motorcycles, bicycles, and fishing. 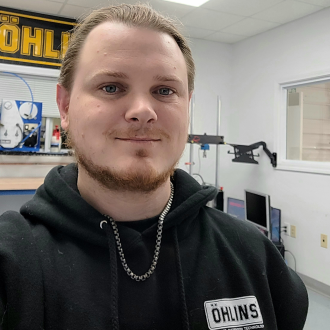 Ben Jecusco
With Öhlins since 2022
Years in the industry: 7
Specialty: NASCAR

Ben is a Production Technician at Öhlins and builds suspension products for NASCAR. He is one of our newer young stars and looks forward to a long future helping Öhlins and learning everything he can about the suspension. Before joining us at Öhlins, Ben worked as an automotive mechanic with Ford for several years.  He is not a stranger to getting his hands dirty and is eager to help whenever he can.  He is happily married and a father of two wonderful boys.

Please enter your email address and select the newsletters you would like to receive.