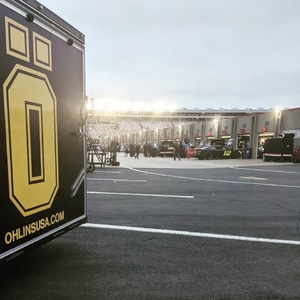 Hendersonville, NC, October 12, 2021 – NASCAR testing began on Monday in Charlotte, NC at the Charlotte Motor Speedway. This is the first organizational test for all drivers to have a chance to experience and become familiar with the Next Gen car. The four NASCAR tests scheduled before the 2022 season are Oct. 11th-12th & Nov. 17th-18th at the Charlotte Motor Speedway, Dec. 4th-5th at the Phoenix Raceway, and Jan. 11th-12th at the Daytona International Speedway.

The Next Gen car will have even more changes at the Nov. 17th-18th NASCAR test. A June 30th crash test prompted necessary alterations to the chassis that would come into play in the event of a collision. Starting in 2022, Öhlins suspension will be on every Next Gen Cup car. NASCAR Senior Vice President of Innovation & Racing, John Probst, said, “The changes will help ensure when there is a wall impact, the failure mode is more of a bending mode rather than a snapping of it” (Motorsport). There are many features of the Next Gen car for the drivers and their teams to explore during these testing sessions.

One of the 21 drivers present at the current Charlotte, NC NASCAR test, Alex Bowman, said, “Hopefully, a whole lot of learning, right? I think there’s still a lot of question marks about the car that we want to learn. I think there’s things that NASCAR wants to learn, so we’re just going to hopefully dial it in. I’m excited to get two days at a road course of testing for me” (NASCAR). This will be a pivotal time for drivers and their teams to not only get a feel for the cars but to also give their assessment. NASCAR Senior Vice President of Competition, Scott Miller, said, “We’ll just be over there working with the teams and looking for team feedback. This is the first time a lot of them have run their own cars, and it will be interesting, the particulars of each team’s feedback as to where some minor improvements could be made” (NASCAR). The NASCAR testing sessions are preparing drivers and their teams for a safe and successful 2022 season.

Please enter your email address and select the newsletters you would like to receive.